The Wearable Art Show is coming up soon, and this year I have been chosen to be a Runway Challenger! That means that myself and five other artists will each be paired with a local business and challenged to create a piece of wearable art using only items from that business. Last year I was a participant in the Open Call portion of the show, where anybody could choose to participate by making a piece of wearable art from anything, and get a model to wear it down the runway. Although most people chose to work with recyclables, I chose fabric since that's my thing, but I consider it wearable art since it is more of a show piece than something one would actually wear. 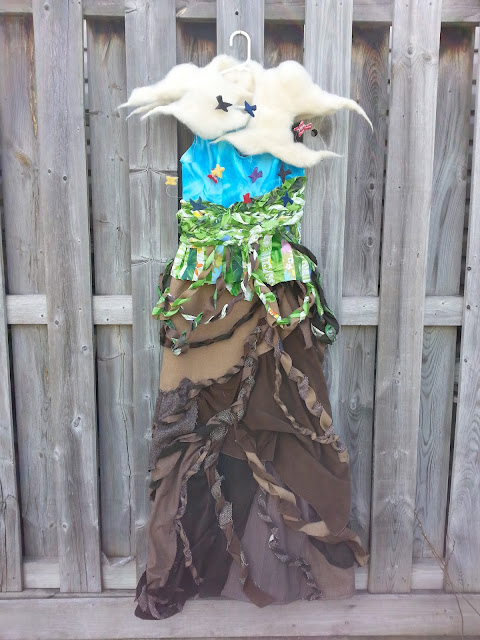 I wanted to do a sky-earth thing, but not in a mother godessy way (although it may come across as such). I made the top first, starting with a fitted bodice using a blue fabric... I think that's the only new fabric I used in this whole thing. Then I made strips of old green coloured bed sheets and then pieced them below the sky. I didn't want a harsh line of transition between the two, so I took long strips of bedsheets and braided them together and stitched them to the bodice in a sashing kind of way. Some braids are tight and some are loose, more noticeable up close.

The skirt is the dirt or the earth. I pieced it with old wool yardage and corduroy from large pieces, old pants, and also tweed from old coats. I love texture, so I also stitched it so that it tucked up and under in some places, just like how the earth is bumpy and uneven. I made braids of the wools and cords as well here. In between the grassy lower bodice and brown earth, I draped braids I made by combining green bedsheets and brown wool and cord.

The cloudy shoulder topper is something I needle felted. Despite several stabbing instances, it turned out fine!

And coming out from the bodice are little felled wool sweater birds that I attached to wire, so they are "flying" out from the piece. I think from far away they are not noticeable, but I needed to add that detail!

I truly enjoyed making this piece so much! I would love to display it somewhere but my house is so tiny and I would not be happy to see it gathering dust as it hangs up here (since I am lacking in the dusting department). So it hangs protected in my closet. Maybe I need to do some more fibre art and eventually have a show and I can display this piece with it?
Posted by Blackbird Pie at 07:53