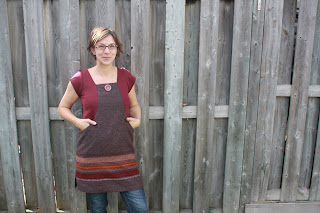 This one is another Fall Fashion Show piece and another piece of my wardrobe in heavy rotation. I lurve it! (lurve being the word we use around here when it is more than love!)

It began a long time ago, in a galaxy exactly like this one...as a skirt

I bought this wool beauty many years ago and did not know what to do with it. I love the colour and stripes but even if I adjusted the waist to make it fit, I couldn't see myself wearing it. And so I held onto it for years until I found the perfect project (much like a lot of my stash is waiting around for the right project).

And thus the romper came into my imagination...

It's hard to tell from this picture but the skirt is a maroon colour, not unlike the sweatshirt. But I had an idea, and so the cutting began. 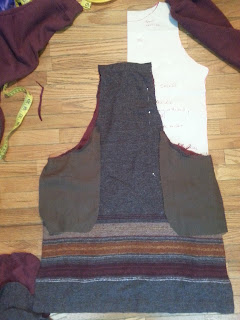 I'm not used to taking any progress shots, so I'm lucky I did even this many!  I basically cut away from the top of the skirt. Then I put it on and while in front of the mirror, I made modifications to the cuts. These cuts would be where I would add the sweatshirt fabric. I often pinned the cut skirt to my t-shirt so I could get a good idea of where the hem would fall and how it would look.

Those brown things are the pockets - the interior that would soon be matched to the other pocket halves, then turned to the inside of the garment.

That large button on the front is for looks and it's a vintage one from my stash. It's still pinned on. Have you ever heard the expression, "The cobbler's children have no shoes"? That's what's going on here. I sew things and finish them when they are for sale or for gifts, but for me it's safety pins until it's been years and I decide it's potentially embarrassing to still have it pinned on. Shhh... don't tell. I love it anyway!