Gwen Stephani Would Want One... 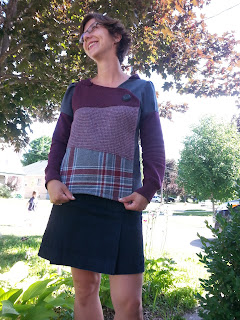 Huh? Explanation - I have a friend who has seen a lot of my makes and apparently commented to another friend that I am cool like Gwen Stefani.... when this other friend relayed this info to me, I laughed. I mean, that's quite a compliment to have one's coolness compared to the coolness of Gwen Stefani, but I laughed because I don't see it. I am Sooooooo not that cool! If asked who I think I am like, it would be Liz Lemon. Actually, I have had a few people tell me I remind them of Liz Lemon, which I also take as a huge compliment because I like Liz Lemon. A lot. We share an affinity for night cheese. But back to Gwen Stefani... I made these hoodies right before a street festival in which I had a booth (the Hootenanny on Hunter Street) and I needed to make tags for them. So after the fabric content and before the washing instructions I wrote that Gwen Stefani would want one, and obviously I would know what she would want because we share a coolness level, right? Exactly.

This was a first foray into Frankensteining such obviously different fabrics into a top.


I mix fabrics all the time in purses but this was a little intimidating. especially using some fabrics that stretch and some that don't, and could possibly shrink!


Let me introduce my best friend 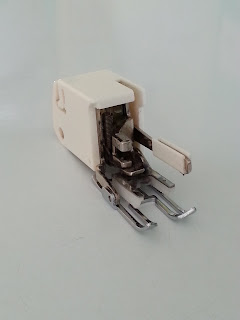 I love this thing!  It lets me sew different fabrics together like a dream!

So anyway, I have been making these hoodies. The top one is a prototype and the one I wear. But I have since sold a few, including this guy: 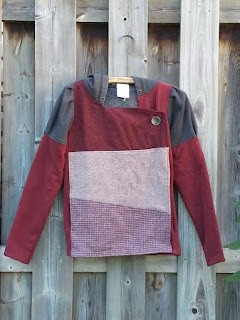 It's my design, but it was easy to do, if not a bit time consuming. I have a basic pull-over jersey pattern I made that I based this off of. I started by making the front panel with wool tweed fabrics, and pieced around it. After making a few I realized that I should make a pattern that would be easier to re-create. I also want to host a few sewing friends for a sew-a-long and I realized that my non-pattern method would not be easy to follow. I may head in the pattern-making direction, but not sure. I do love creating, and tire of making the exact same things over and over.... If anyone reading this wants more details, just let me know! I'd be happy to share tips and techniques!